In the strangest of affinities, Kanye West has used his business acumen and foresight to make sure the market for confederate themed merchandise continues to thrive.

The savvy businessman knows that as soon as mega-corporations like Walmart determine that someting is no longer 'cool', the cool kids just want it that much more. 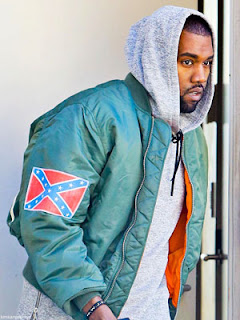 One of Kanye's designs features the rebel flag with the words "I ain't coming down" in one of the most prescient of pre-responses to a top-trending story that took years to catch up with this innovator...


Excellent blog here! Additionally your site loads up fast! What web host are you using? Can I get your associate link in your host? I want my web site loaded up as fast as yours lol netflix account

You need to be a part of a competition for one of the biggest websites on the web.I would definitely highly recommend this site! You can easily apply to the Turkey evisa application system takes just 5 to 10 minutes to apply and within 30 minutes e Visa Turkey Travel sends to your email.

I am browsing this website daily and get good facts from here all the time. Aw, this was a really nice post. kenyan evisa, Obtaining a Kenyan visa is quite convenient for individuals who wish to travel to the country for tourism or business purposes.

I love to read this, thank you... Indian visa online for US citizens, You can apply online completely securely through eVisa India website. The government of India has announced that travelers with tourist visas are now allowed to stay in India for a maximum period of 30 days.

Nice info.. Thank you.... You can get all info about OCI card application form and see the sample of OCI card via Online Indian evisa website.

To keep current, you need to find trustworthy technology news sources that will provide you with up-to-date information.